Despite some frustrations and some ups and downs here and there, 2011 was overall an exciting year. I’m pretty sure I’ll look back at this one when I’m older and go “aww yeah, 2011 was the year of awesome.” I have a feeling 2012 is going to be pretty challenging, but I’m looking forward to it and am ready to face it head on.

January started off right with the Crunchies after party at the Exploratorium; there’s nothing quite like unleashing a bunch of 20 and 30 somethings, hopped up on vodka red bull, into a building filled with gadgets, sounds, and all sorts of hands-on exhibits. The other C and I also made it to the Monterey Bay Aquarium for the first time and hung out with some grad school friends who visited from TX and Denmark.

February kept things moving with a three week visit from my Northern Irish cousin and one of her good friends. We played tourist, danced the night away at DNA Lounge, gambled our way through Reno, and sat in awe for a three hour long Elton John concert. A friend from high school who I hadn’t seen in forever also visited, which made February the official month for catching up.

In March I ventured over to the UK to visit parents and friends. I also made it to Northern Ireland for my Grandmother’s surprise 80th birthday. Although I was convinced that she had figured us all out, she was completely shocked to see everyone who had driven down or flown over for her birthday.

April was dedicated to wine tasting and Disneyland. I didn’t think it was possible, but the group I went with managed to ride almost every single ride in both Disneyland and California Great Adventure (or whatever it’s called).  Needless to say, I was exhausted and extremely cranky by the end of the day (but it was magical and well worth it).

May was one of the most fun months ever (like omg for srs!). First I went to New Orleans for Jazz Fest, which consisted of a pub crawl from one end of town to the banks of the Mississippi, fried alligator, beignets, and flippin’ sweet music. I later made it to Houston to visit my good friend Sara who was working there as a teacher. I also made it a bit further south to visit some family I hadn’t seen in a while. AND! I met the other C’s parents in Kingwood. Once the great NOLA/TX journey was done, it was time for more wine tasting with the other C’s siblings and a whirlwind apartment search. Somehow the other C and I managed to snag a wonderful apartment right next to Alamo Square.

In June I went to Nova Scotia with my grandmother (the one who just turned 80) to visit her older sister who lived in a nursing home up there. It was a strenuous, but rewarding trip.

July was the month for learning how to become a “hacker.” I took a beginner Java course at UC Berkeley and learned all about loopy things and some other quirky stuff from a professor who showed up with Doc from Back to the Future’s hair and a repertoire of puns related to coffee and Indonesia. The other C and I also celebrated our first anniversary by spending some time on the road and hiking.

August was for relaxing in Colorado and then launching into my first semester of law school at UC Hastings.

In September I thought I’d figured it all out and didn’t find law school all that difficult. Well, it was a lot of work but I didn’t quite understand what all the fuss. Then…

October hit and I understood.

November was for taking take home exams, doing most things at home, and being incredibly grateful for having a caring boyfriend who always knows how to make the anxiety go away. Thanksgiving was the highlight of the month. We hosted it at our place and C’s parents, brother and boyf came over for Apples to Apples, good food, and a whole lot of silliness.

December, or at least the first half, can be defined as ahhhhhhhhhhhhhh! Exams are terrifying. It doesn’t really matter if you’ve studied for days on end and have read every case and most of the supplement if you get test anxiety. I managed to come out only moderately scathed, partied hard, and was happy to have made some awesome and smart new friends. After collapsing in a heap for several days and playing the new Zelda game, I flew to Cleveland for Christmas, then to Colorado, which is where I am now!

I didn’t make it to any new states or countries in 2011 – in fact, I barely left SF – which is a let down from my yearly goal. However, I got to know my city better and fell even more in love with California than I was before. Will I make it to any new places in 2012? Not too likely. But with some weddings coming up, it looks like 2012 will be even more of a reunion year than 2011 was. And perhaps I can make it somewhere sweet over spring break, like Vancouver or Arizona. 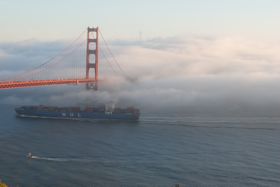