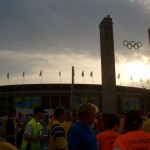 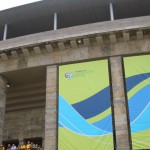 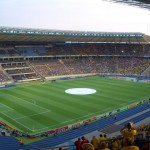 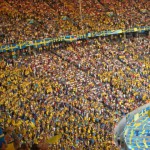 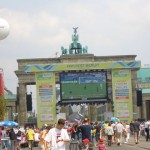 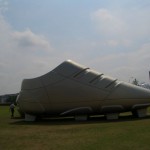 Some people measure their lives in terms of major accomplishments (i.e. graduations, jobs, weddings, births, etc.), but not me. I can pretty much tell you what’s happened in my life based on two things:

Okay, number 2 only works from 1994-onwards, but give me a break. Prior to that I only thought of football as the sport smelly boys played. It wasn’t until 1994 or so until I was forced to play it myself!

Year: 1994
Place: USA
This was the first World Cup I watched with excitement. I sort of knew what it was before that, but not really. My parents and I had recently moved from Singapore to Connecticut and we spent the summer visiting different friends around the States. Those jerks (my parents) attended a few different game in Chicago and New Jersey, while I was left alone with a babysitter to check out some of Chicago’s great museums. We also managed to get to Mexico City for a week, during which Mexico won a game. This resulted in avid fans standing on top of VW buses and an endless barrage of horn blowing and flag waving. The spectacle, accompanied by the city’s high elevation, was quite a lot to take in for my 10 year old self.

Year: 1998
Place: France
At this point I was fairly comfortable in my Connecticut home, although I do remember this as the “end of the Connecticut days.” My dad brought me to England for a brief father-daughter trip at some point in June. We watched a few games in Oxford, which was really fun. I later watched the final at home, alone. Those jerks had somehow wheedled their way into the final game, which I got to hear all about later on the phone. For some reason I was happy for the French. I believe this may have had to do with the fact that I studied French in school.

Year: 2002
Place: South Korea
This World Cup was AWESOME! Ireland qualified and did extraordinarily well (for Ireland). I wore my Irish jersey almost every single day and was proud to see that crowds of Irish fans were in attendance at actual games in South Korea. The jerks, who didn’t go to South Korea (thankfully for me), decided we’d go to Dublin instead. For the final game (Brazil vs. Germany) we happened upon a pub filled with Germans and Brazilians…it was a bit tense.

Place: Germany
Year: 2006
THE BEST! I was on summer break, staying with my parents in London and happened to be doing a research internship at the House of Lords. I watched as much football as possible, which included sneakily turning on the TV (while in parliament) to watch it when I probably should have been doing research. I was in a pub on Portobello Road when England lost to Portugal, I made frenemies when I rooted for Argentina against someone else in a pub (I had studied in Buenos Aires the summer before), and heard different neighborhoods erupt with cheers when Spain and Italy won their respective matches. Additionally, one of the jerks (dad), took me to Berlin to see a game. It was Paraguay vs. Sweden. We didn’t need no zuzuvelas, just a crowd of Swedes and a cup filled with beer! “Sveeeerig!” I’ve included pictures from the game above.

Year: 2010
Place: South Africa
This World Cup has been a bit lackluster so far. Perhaps it has to do with the fact that I’m living in the US again so I have to wake up at 4am or 7am to watch a large portion of the games (Thank goodness I’m unemployed or I’d never be able to watch those 11:30am games!). Perhaps it has to do with the fact that almost all of the teams SUCK this year (here’s lookin’ at you England!). It’s fun watching the games with friends here but I think I’ll try to go to Europe for the next one. I’m sick of explaining why I care and why I don’t support the US team. Yes if you go to the right bar you’ll find a crowd, or if Mexico happens to win you’ll hear cheering, but it’s just not the same. I’m sad that France is in instead of Ireland. But most of all, I’m sad that I can’t experience this World Cup with the jerks. My dad has now decided that rugby is superior to football so he had no desire to travel to South Africa. Nevertheless, it’s just not the same watching it without them.

Maybe I should have titled this post “Stupid Parents.” That’s enough rambling for now. I’m not even going to mention my love for Wimbledon, which starts next week.