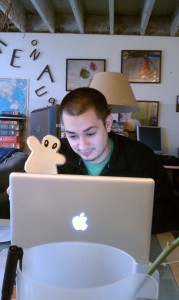 Hangin’ at a dojo, but sadly not the martial arts kind.

It’s Saturday afternoon and instead of partaking in a Santa themed bar crawl (Santacon 2010), I am sitting on a couch at Mountain View’s Hacker Dojo for Super Happy Dev House. I’m pretty sure I’m one of 10 females here- I’m guessing there are at least 100 people here overall. The picture I’ve included of the other C is sort of supposed to be a representation of the geekery here, but I’d say he’s a bit cooler than the rest (just a bit).

At least it’s supposed to rain so I shouldn’t be too sad about spending the day on my computer. My goal is to learn something awesome so I’m not such an internet n00b anymore. While everyone else here is discussing iPhone apps, language code that sounds kind of like qoeiurfsrerery, and probably Star Trek, I will be reading CSS: The Missing Manual. I will possibly update later if I figure something out, or am not feeling horribly lazy.

Attempting to amp up the nerdery while C is out of town.